Georg Wolz (1863—1917) was born in Lorraine, today's France. He settled in Bulgaria in the last years of the 19th century when he arrived from France to prepare photographs and topographic maps for the railway lines that were being built in our country at that time. He opened his own photography studio in Sofia, which he called a Museum of Photography and began to work professionally in this field. He took some emblematic photos that transformed the idea of photography in Bulgaria at that time.

Georg Wolz made the first aerial panoramic photos of Bulgaria taken from an airplane. He documented the construction of the Bulgarian railways, captured important events for this country from the period of the Third Bulgarian Kingdom — the declaration of Bulgaria’s Independence, the visit of Grand Duke Vladimir Alexandrovich, the unveiling of the monument to Tsar Liberator in Sofia, the construction of the St. Alexander Nevsky Cathedral, the big 1913 earthquake in Gorna Oryahovitsa etc.

The most well represented in the album is the Balkan Wars during which Georg Wolz accompanied Tsar Ferdinand I of Bulgaria. He photographed scenes on the battlefield from different points of view and give very detailed information about the events. The other topic is "Old Sofia" (between 1900—1910). The third theme is "The Royal Family" — very intimate photographs of the ordinary daily activities such as a walk in the park, the botanical gardens or the forest. Apparently the photographer was very close to Tsar Ferdinand I and his family and managed to capture many personal moments away from the public eye. The fourth theme is "Landscapes from Bulgaria".

Окръг София
The vicinity of Sofia in the early 20th century

Събития
Historical events from the time of the Kingdom

Царят и неговото семейство
The royal family and their lives 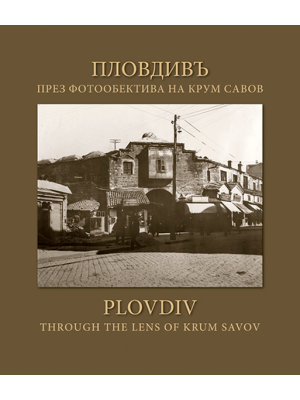 Plovdiv through the lens of Krum Savov
20.00лв
Add to Wish List
Add to Comparison