The book explores the attitude of the Bulgarian army towards Croatian soldiers and civilians at the end and aftermath of the Second World War. The events related to the tragedy of the Croatian army and Croatian refugees near the Austrian town of Bleiburg are also affected. During the final operations on the territory of Yugoslavia, the First Bulgarian Army was also present, whose actions are closely connected with the recent Croatian history. Based on research from archival sources, various documents and conversations with witnesses, the author points out how, due to communist myths and ideology, the centuries-old friendship between the Bulgarian and Croatian people has been erased from their memory. While in Tito's Yugoslavia the Bulgarians were referred to as "fascists", in Bulgaria, at the expense of the artificially created "Yugoslav" nation, the peoples of Yugoslavia were completely depersonalized. Revealing historical events and new facts, the author describes a number of personal human destinies, which testify to the true friendship between the two nation in the difficult and fateful days of World War II. The book presents a new aspect of hitherto unknown data on the Bulgarian-Croatian relations during the Second World War and in particular during the final military operations. 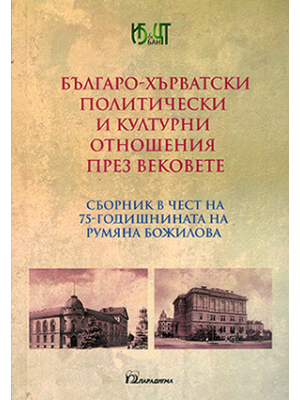 Bulgarian-Croatian political and cultural relations through the centuries
25.00лв
Add to Wish List
Add to Comparison