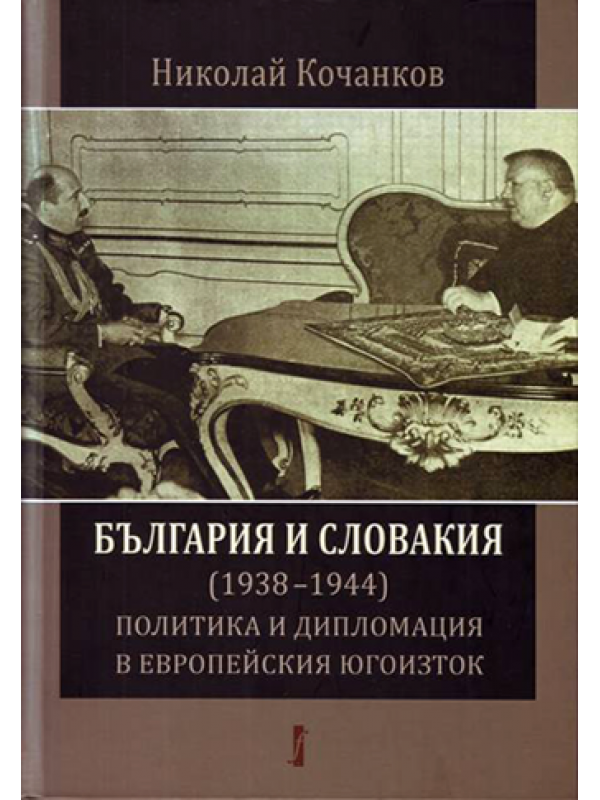 Bulgaria and Slovakia (1938–1944): Politics and diplomacy in South East of Europe

Bulgaria and Slovakia (1938–1944): Politics and diplomacy in South East of Europe (A documentary study). Author: Nikolay Konchankov. Language: Bulgarian with an extended summary in English

The monograph is devoted to the documentary research of the history of Bularian—Slovak relations on the eve and during the World War II.

Introduction. The Versailles order and the Republic of Czechoslovakia — A view from Bulgaria (1918—1938)

Chapter One. “Peoples’ self-determination” as an argument for “reorganization” Central Europe (Septeber 1938 — March 1939)

The Czechoslovak—Hungarian dispute and the Vienna Arbitration

Bulgaria after the Munich conference

The end of the Czechoslovak republic

The destruction of the Czechoslovak republic, the European resonance and the Bulgarian diplomacy

The creation of Slovak republic. A view from Bulgaria

The status of Slovak republic under International law: between public information and the estimates of Bulgarian diplomats

Structure and internal political development of the Slovak republic

On the eve of the war. The Ribbentrop-Molotov pact

The “third aggressor” in war against Poland

Bulgarian diplomacy on the perspectives in South-Eastern Europe

South-Eastern Europe after the fall of France

The Slovak state on its way to restructuring

The Bulgarian diplomatic mission in Bratislava

The Belgrade coup, the war on the Balkans and the reaction of Bratislava

The War in the East and the German satellites

The expansion of the military conflict. The new engagements of the smaller allies of the Third Reich

The satellites after the German defeat at Stalingrad

Slovakia through the eyes of the Bulgarian diplomatic representatives in Bratislava

The crisis of the Italian government and the U.S.—British landing in Sicily

The exit of Italy from the war and the satellites

Waiting for the epilogue. Attempts of maneuvering