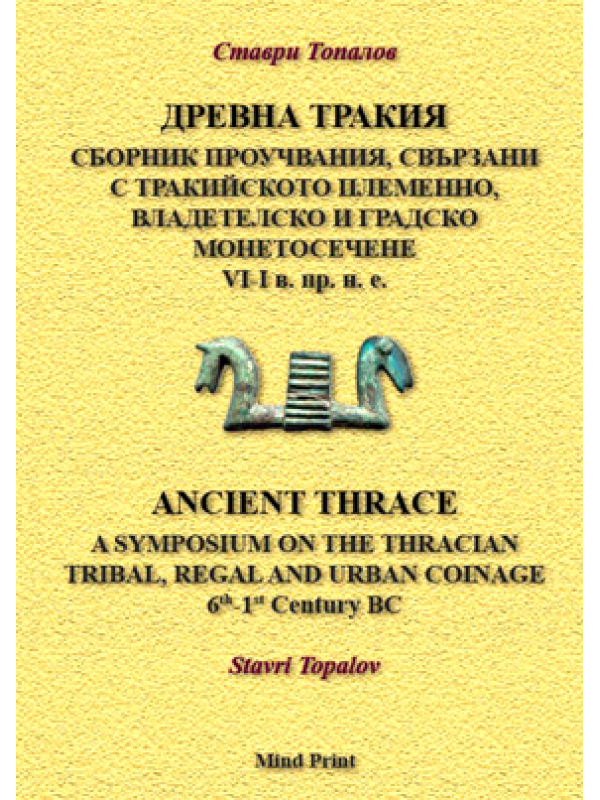 Ancient Thrace: A Symposium on the Thracian Tribal, Regal and Urban Coinage (6th­–1st Century BC)

Were Thracian Imitations of Coins of the Type “Silenus and Nymph” Minted by Thracian Tribes and Early Odryssian Kings?

A New Study of the Denomination of the Silver Coins of the Type “Silenus and Nymph” of Weights between 4.00 g. and 3.50 g. Minted from the End of 6th Century BC to the First Quarter of 4th Century BC

Information about a Bronze Coin of High Denomination of the Type “Man’s Head with Long Straight Hair, Beard and Moustaches R. — Vine with Two Grapes, a Monogram on the Right, All in a Concave Square” from a Private Collection

Critical Notes of Reviewing Results of Studies on the History of the Early Odryssian Kingdom in the Article “Counter-Marked Silver Coins of Saratokos and Kotys Minted in Maronea”, Jubilee Symposium “One Hundred Years of the Birth of Dr. Vassil Haralanov”, Koychev, 2008, 285—304

Contribution to the Study of the Bronze Coins of Pyrrhos, King of Epire, Minted in Macedonia in Time When He Was King of Macedonia

Did Ptolemy Keraunos Mint Coins during His Short Reign in Macedonia in 280 BC?

New Contributions to the Study of the Types of Monograms, Combinations of Monograms and Counter-Marks on Adaeus’s Coins

Bronze Coin of the Type “Heracles’s Head — ΑΛΕΣΑΝΔΡΟΥ Crook, Bow, Quiver” Counter-Marked as a Thracian Imitation of Coins of the Same Type

An Unusual Counter-Mark on a Bronze Coin of Roemetalces I

Bronze Coins of Kypsela of the an Unknown Small Demomination

A New Contribution to the Coin with Legends ΜΕΛΣΑ

New Information on the Images and Counter-Mars on Bronze Coins of Apollonia Pontica of Type “Apollo’s Head R. — ΑΠΟΛΛΟΝΟΣ  ΙΑΤΡΟΥ Apollo’s Statue of Full-Face Apollo Standing and Holding a Laurel in One Hand and a Bow and Two Arrows in the Other”

New Possibilities of Study of the Initial Stages of Activity of Messambria Mint during the Roman Period in the Lands of Thrace Offered by the Monetary Type “ΚΑΙΣΑΡΟΣ ΣΕΒΑΣΤΟΥ Emperor’s Head R. — ΜΕΣΗΜΒΡΙΑΝΩΝ Full-Face Apollo Standing and Holding a Plectrum and a Lyre”