The truth in the history
30.00лв
Add to Wish List
Add to Comparison
Home » Antiquity » Numismatics » Roman Provincial Coinage » The Coinage of Bizye 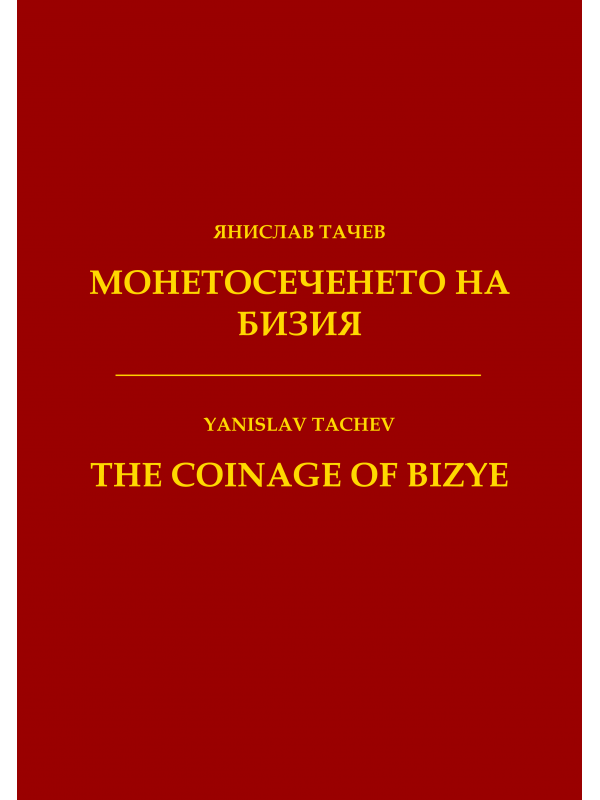 Yanislav Tachev. The Coinage of Bizye
Language: Bulgarian with an extended summary in English

The monograph is an attempt to correct the inaccuracies accumulated over the years and to provide updated solutions to the problems of the Bizye coinage. The main aspects of provincial urban coinage are covered: reverse iconographic types, coin legends, par values, chronology, circulation, and spread.

The study results of new numismatic finds reveals a different picture of all issues concerning Bizye coinage. The individual chapters and paragraphs address the following tasks:

— definition of the exact number of the obverse and reverse coin dies for studied finds including establishment of existing links between them;

— the number of individual issues for each Emperor family and their chronology are established;

— the generic reverse dies for members of the imperial families are identified. All kinds of reverse images are classified and their number is determined;

— all reverse types, including variations and sub-variations, are collected, analyzed and systematized;

— the reverse types, variations and sub-variations are classified, while their numbers and the numbers of reverse dies for each Emperor or member of his family issues are determined;

— the reverse dies are classified according iconographic patterns, following the emergence and development of individual iconographic types and their deviations within the imperial families;

— the existing chronology about the emergence of some reverse types is reviewed;

— the study findings establish that the coinage of the peregrine city Bizye lasts one hundred and forty years, starting with the issue of pseudo-autonomous coins during the last decade of the Emperor Trajan (98—117) reign and ended in year 247 — during the reign of Emperor Philip I (244—249);

— the hiatuses in the city mint activity are clearly stated;

— individual urban emissions are accurately dated within the closest chronology, and not referred generally to individual Emperor reigns;

— the monograph contains published for the first time large numbers of new reverse types, variations and sub-variations, as well as dozens of new combinations of coin dies;

— based on large number of numismatic finds, the parameters of all types of Bizye coins are determined, as well as the par values for each emperor or member of his family — established. Several inaccuracies found in previous publications for determining some city coins par values have been corrected;

— the study established how many par values are issued and circulate in parallel in the local economy at any moment of the functioning of the city mint;

— the catalog of the study surveyed coins are classified chronologically, their par values listed, the numbers of their obverse and reverse dies, the full metric parameters, the position of the dies in reference to the coin planchet, the storage of each specimen and the publication, which first mentioned the respective coin type;

— all specimens included in the catalog are illustrated with real-life color photographs.

I. Chapter. Short notes on the history of ancient Bizye

V. Chapter. Links between the coins dies and chronology of issues