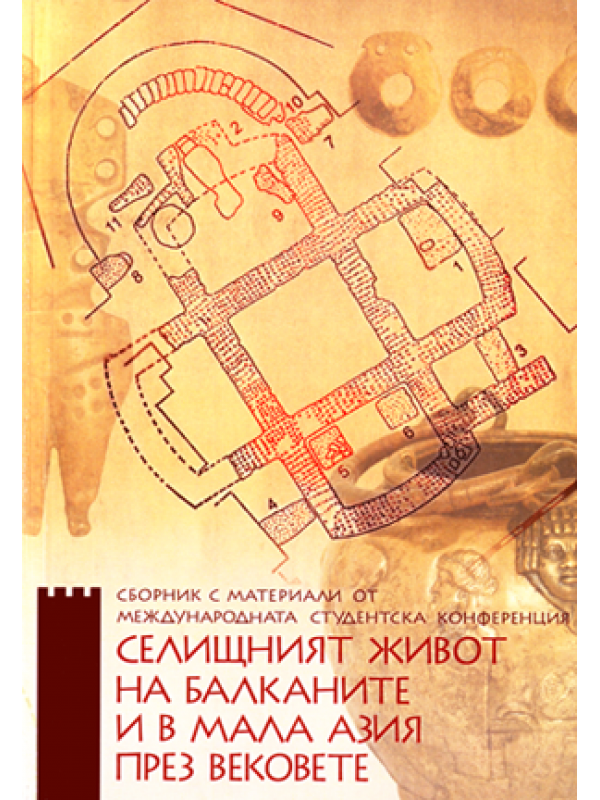 Settlement life at the Balkans and Asia Minor through the ages

Proceedings of the 4th international student conference "Settlement life at the Balkans and Asia Minor through the ages", 14th—16th of May 2009, Veliko Tarnovo, Bulgaria

T. Valchev. Routes of spread of the Neolithic culture in Bulgaria

A. Atanassov. Neolithic defensive works from the territory of Bulgaria

R. Yordanova. Models of buildings as a source for prehistoric architecture

G. Ivanov. Manufacture of apparel and amulets of bone and shells of molluscs as a part of the settlement life during the Neolithic and Eneolithic in Bulgaria

Y. Parinova. Two-storey Neolithic and Chalcolithic dwellings according to data from the territory of Bulgaria

R. Ivanov. Settlement life during the Chalcolithic period in the valleys of the Mechka and Kayaliika rivers

I. Suvandzhiev. Settlement model during the so-called “Transitional period” in the Prehistory

R. Ivanov. Settlement network on the Dragoyna Hill in the Bronze and Iron Age

P. Grozdanov. The ports of the West Pontic cities as a factor for their development 5th c. B.C. to 1st c. A.D.

V. Ivanov. Street network in the Roman cities in the territory of Bulgaria 2nd to 3rd century

P. Doychev. Reconstruction of the fortification system of the fortress in Hisarlaka near the town of Sliven during the Early Byzantine period

B. Piotrowski. Migration of the Goths [full text]

A. Parvanova, M. Metodiev. Town and capital in Bulgaria 12th to 14th century

Z. Gyuleva. Changes in the appearance of towns in the Bulgarian lands after the end of the 14th century

M. Dzhambazova. Religious and secular architecture in the Ottoman empire in the 15th — 16th century. Ancient and West European influence

D. Georgiev. The settlement life in the Balkans in the vision of the British travelers (early 18th — early 19th century)

P. Georgieva. Church public chronicles as a source of information for settlement anthroponymic system (according to data from the town of Dve mogili, Ruse district)